Hailing from Siegburg, a small town just outside of Cologne, Germany, Sober Truth formed in 2007 not quite sure of what they wanted to play, but knowing that it had to be metal. 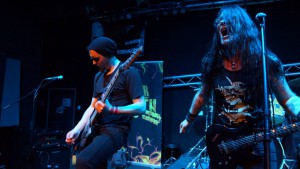 s made music that we like. Because each of us carries around specific influences, it creates a wonderful own metal-mixture. I think it is most suitable with the Progressive Groove Metal,“ says Torsten Schramm (vocals/guitar), but he doesn’t quite like labels.  “Sober Truth sounds very special, you could almost invent a new genre to name it. I suggest, you make your own judgment . What will please is good and needs no division.“

“Our Influences are wide-ranging. We love handmade rock music – we like the stuff from bands like Sostafir, Machine Head, Soulfly, Monster Magnet and many more. All styles of metal we listen to. Bands like Metallica, Black Sabbath, Led Zeppelin impressed us in the youth,“ Schramm adds.

As for the band’s lyrical content, Sober Truth follows the lead of their inspriations writing their songs about “life in all its facets,“ but their main inspiration comes from lived emotions such as love, hate, friendship, family, and hope and social behavior.

“Primarily we do hope to stand out with our special way to do the songwriting. Our whole lifeblood is in this work. And not to forget the special voice of Schrammstein,“ says Schramm, referring to himself by his nickname, which might very well be a reference to another band of influence.

Despite a unique style with a plethora of influences, Sober Truth has had a rocky history in these last nine years, particularly in the lineup department as the band has seen many members come and go. Fortunately, the band has had a stable lineup since the beginning of 2015.

Since their inception, Sober Truth has released three albums for fans to sink their teeth into including two full length albums, ‘Riven‘ and ‘Outta Hell‘, and most recently the 2014 EP ‘New Slavery World.‘

With their current lineup, the band is working hard to create their fourth release, which is taking priority for the band, as they plan to release their new album sometime in 2016. Of course, don’t count the band out on touring, especially if Soulfly or Machine Head is offering a spot on their tour. In the last nine years Sober Truth has played over 180 live shows including Ragnarock, Rheinkultur, Metal Franconia Festival, Cologne Metal Invasion, and Til´ Somone Cries Festival

“We like to keep that level high to play live as much as we can,‘ says Schramm in regard to the band’s impressive performance record, which averages out at 20 shows a year. “Our Motto. Operatin live.“

As for a tour in the USA, that’s unfortunately out of the question at this time, but next year is definitely looking up for Amercians fans. In the meantime, we can all look foward to the new album and perhaps a new music video or two for the new tracks, which the band says have been well received already.

“We are so happy to see that the hard work on the new album is worth it. We already played some new songs on gigs and the fans love them,“ says Schramm. “We plan to get the album supported well.“

As for our European fans, your chances of seeing Sober Truth in 2016 are pretty high, so keep an eye and an ear open for these guys. The band promises that when you see them live you’ll be put under a spell, especially by the new songs. After all, the band has put its heart and soul into this new record. That being said, Schramm and his compatriots want one thing from this new album; “to present our fans a rich album.“