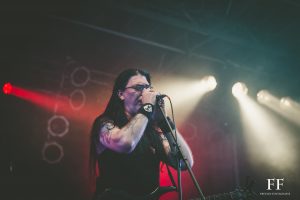 Sober Truth have just released a vinyl from the new album
„Locust – Lunatic Asylum.“ The fourth studio album of the Prog Groove Metal Band from the Köln / Bonner Raum, produced by TaktArt, offers its listeners a varied journey through various moods and interesting contents over 46 minutes.

The lyrics deal, among other things, with themes about one’s own reality, the perception of one’s own environment and the questioning of one’s own actions. Topics such as „procrastination“ and questionable life targets are addressed. The album does not answer any questions. It does, however, encourage us to think further and deliberately leaves plenty of room for our own interpretations. Musically, the new album cannot easily be classified in a typical genre.

This album is the result of the band’s musical evolution and cautiously enters the genre of Prog Groove Metal. The combination of melancholic sounds, energetic guitar riffs and driving drums remind us of Progressive Rock / Metal, Groove Metal and Thrash Metal. In addition, subtly used orchestras, choirs and other samples enrich the soundscape. Each of the 12 tracks tell their own story. One thing can be said in certainty : The journey continues …

„The name of this album is derived from our song ‚Leave the Locust in the Lunatic Asylum“. We are deliberately playing with the biblical portrait of the Locust, which can relate to a variety of personal experiences and problems, such as the excessive consumption of certain media, new problems in the digital age or perhaps the negative experience of an extremely bad relationship. Each listener will recognise his own story here. The title of this song inspires and recommends that this „Plague“ is simply to be left in a lunatic asylum. In an interpretation of this story, we have named this lunatic asylum „Locust Lunatic Asylum“

The album „Locust Lunatic Asylum“ is available as vinyl and CD at TaktArt Records and Sober Truth. You can order the disc here:

‚The Plague Eats Your Perception‘ / ‚ Every Leaf of Your Reality‘.
The track „Leave the Locust in the Lunatic Asylum‘ is also one of the album highlights which describes the plague which has infested humanity and slowly eats away our reality like a locust nibbling on tree leaves. The video for the track is directed by Anna Jäger-Hauer

Watch the video on Youtube, Facebook and of course on the band homepage. No! We do not want to give out too much, but in this video they have once again thrown some typical genre elements overboard. It may be quite different from what you have come to expect from Sober Truth. We are eager to hear your feedback, don’t hesitate to send us your comments!

This website uses cookies to improve your experience while you navigate through the website. Out of these, the cookies that are categorized as necessary are stored on your browser as they are essential for the working of basic functionalities of the website. We also use third-party cookies that help us analyze and understand how you use this website. These cookies will be stored in your browser only with your consent. You also have the option to opt-out of these cookies. But opting out of some of these cookies may affect your browsing experience.
Necessary immer aktiv
Necessary cookies are absolutely essential for the website to function properly. This category only includes cookies that ensures basic functionalities and security features of the website. These cookies do not store any personal information.
Non-necessary
Any cookies that may not be particularly necessary for the website to function and is used specifically to collect user personal data via analytics, ads, other embedded contents are termed as non-necessary cookies. It is mandatory to procure user consent prior to running these cookies on your website.
SPEICHERN & AKZEPTIEREN